Religion Andrew Rezmer Self-Improvement Philosophy Society 6 Em 7 Psychology Podcasting Education
By Andrew Rezmer. Discovered by Player FM and our community — copyright is owned by the publisher, not Player FM, and audio is streamed directly from their servers. Hit the Subscribe button to track updates in Player FM, or paste the feed URL into other podcast apps.

Conscious Living Radio « »
Where Madness Lies: Finding Love Based Solutions in a Time of Uncertainty with Sylvia True


MP3•Episode home
By Andrew Rezmer. Discovered by Player FM and our community — copyright is owned by the publisher, not Player FM, and audio is streamed directly from their servers. Hit the Subscribe button to track updates in Player FM, or paste the feed URL into other podcast apps.

Anywhere in the world by Stream, Satellite, TelusTv - How to Listen

Only last 10 shows are available to listen to for free - REGISTER NOW. Supporting Members have unlimited access to this and hundreds of other life changing programs - Click Here to sign-up

In this episode of CLR, join Tasha Simms and Marc Caron as they speak with Author, Sylvia True. Sylvia is the author of The Wednesday Group and Where Madness Lies.
Where Madness Lies, Sylvia True’s second novel, is a story about hope and redemption, about what we pass on, both genetically and culturally. It is about the high price of repression, and how one woman, who lost nearly everything, must be willing to reveal the failures of the past in order to save future generations. With chilling echoes of our time, this novel is based on a true story of the author’s own family.

“Where Madness Lies is an intimate page-turner that is full of heart. Engrossing and devastating, this brave novel reminds us of the power of human connection and the inherent goodness of most people.” – Heidi Pitlor, author of The Daylight Marriage and Impersonation.

Germany, 1934. Rigmor, a young Jewish woman is a patient at Sonnenstein, a premier psychiatric institution known for their curative treatments. But with the tide of eugenics and the Nazis’ rise to power, Rigmor is swept up in a campaign to rid Germany of the mentally ill.

USA, 1984. Sabine, battling crippling panic and depression commits herself to McLean Hospital, but in doing so she has unwittingly agreed to give up her baby.
Linking these two generations of women is Inga, who did everything in her power to help her sister, Rigmor. Now with her granddaughter, Sabine, Inga is given a second chance to free someone she loves from oppressive forces, both within and without.

This is a story about hope and redemption, about what we pass on, both genetically and culturally. It is about the high price of repression, and how one woman, who lost nearly everything, must be willing to reveal the failures of the past in order to save future generations.

With chilling echoes of our time, Where Madness Lies is based on a true story of the author’s own family.

Sylvia was born in England to parents who were refugees from Germany. She moved to the US when she was five. 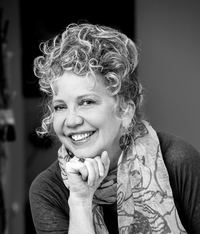 Growing up with parents from a different culture, a mother who was a Swiss champion figure skater, and a father who was a theoretical nuclear physicist, gave her varied and unique perspectives.
Sylvia is a high school chemistry teacher and head of the Science and Technology Department at Holliston High School. During her summer breaks, she likes to travel to the Amazon and do research in the rainforest.
She has raised two daughters, who are both pursuing their passions. If Sylvia had to sum up who she is in a word, she would say learner. There is so much in this world that she is deeply interested in—science, the paranormal, writing, teaching, and of course her grandchildren.
Presently, she lives in Massachusetts with her two very spoiled dogs. Please feel free to contact her and ask her any questions. She looks forward to responses to both of her novels.
Sylvia’ other book, The Wednesday Group, is a captivating, moving novel about friendship, marriage, and the bonds that connect us all. 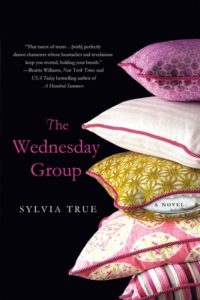 Gail. Hannah. Bridget. Lizzy. Flavia. Each of them has a shameful secret, and each is about to find out that she is not alone… Gail, a prominent Boston judge, keeps receiving letters from her husband’s latest girlfriend, while her husband, a theology professor, claims he’s nine-months sober from sex with grad students. Hannah, a homemaker, catches her husband having sex with a male prostitute in a public restroom. Bridget, a psychiatric nurse at a state hospital, is sure she has a loving, doting spouse, until she learns that he is addicted to chat rooms and match-making websites. Lizzy, a high school teacher, is married to a porn addict, who is withdrawn and uninterested in sex with her. Flavia was working at the Boston Public library when someone brought her an article that stated her husband had been arrested for groping a teenage girl on the subway. He must face court, and Flavia must decide if she wants to stay with him. Finally, Kathryn, the young psychologist running the group, has as much at stake as all of the others.

As the women share never-before-uttered secrets and bond over painful truths, they work on coming to terms with their husbands’ addictions and developing healthy boundaries for themselves. Meanwhile, their outside lives become more and more intertwined, until, finally, a series of events forces each woman to face her own denial, betrayal and uncertain future head-on.

From author Sylvia True comes The Wednesday Group, a captivating, moving novel about friendship, marriage, and the bonds that connect us all.

The post Where Madness Lies: Finding Love Based Solutions in a Time of Uncertainty with Sylvia True appeared first on Conscious Living Radio.

L
Life Is A Marathon

15d ago2w ago
Subscribe
Unsubscribe
Monthly+
The Life is a Marathon show gives you inspiration, motivation, and resources to empower you to thrive and win in the marathon we call “life!” Bruce Van Horn is a Life Coach, Mentor, Thought Leader, Best-Selling Author, Entertaining and Motivational Speaker, Dad, and Marathon runner. He brings his respected insight, wisdom, leadership, and storytelling abilities to this podcast to share with you information, tips, life-hacks, and entertaining and heart-warming stories with the goal of helping ...
B
Barbell Logic

18m ago18m ago
Subscribe
Unsubscribe
Weekly+
Join expert voices from Barbell Logic and others from the world of strength for resources to help you get strong for life. Get coaching options and more educational content at barbell-logic.com.
T
The Religious Studies Project

3d ago3d ago
Subscribe
Unsubscribe
Weekly
A weekly weight loss podcast, Half Size Me is your counterculture alternative to the weight loss establishment!
H
Happier with Gretchen Rubin

5m ago5m ago
Subscribe
Unsubscribe
Weekly+
Gretchen Rubin is HAPPIER, and she wants you to be happier too. The #1 bestselling author of The Happiness Project and Better Than Before gets more personal than ever as she brings her practical, manageable advice about happiness and good habits to this lively, thought-provoking podcast. Gretchen’s cohost and guinea pig is her younger sister, Elizabeth Craft, a TV writer and producer living in Los Angeles, who (lovingly) refers to Gretchen as her happiness bully. Part of the Cadence13 Network.
W
World Spirituality

1d ago1d ago
Subscribe
Unsubscribe
Weekly
Our planet is becoming a global village, yet enormous differences remain in culture and spiritual tradition—differences that can lead to misunderstanding, hatred, and war. Host Paul John Roach and his guests explore the unity and common values shared within all cultures and faith traditions.
C
Curiosity Daily

9m ago9m ago
Subscribe
Unsubscribe
Daily
The award-winning Curiosity Daily podcast from Curiosity.com will help you get smarter about the world around you — every day. In less than 10 minutes, you’ll get a unique mix of research-based life hacks, the latest science and technology news, and more. Discovery's Cody Gough and Ashley Hamer will help you learn about your mind and body, outer space and the depths of the sea, and how history shaped the world into what it is today.
F
Fajr Reminders

7m ago7m ago
Subscribe
Unsubscribe
Daily
Thought share about the application of Islamic belief and ethics in our modern pluralistic society. The “How”, for those who understand “Why”. And the “Why” for those who need to understand the reason.
T
The RobCast

11h ago11h ago
Subscribe
Unsubscribe
Weekly
Kingdom Intelligence Briefing Podcast serves as a digital portal to nurture and empower the Remnant worldwide. Join Dr. Michael K. Lake (Author of the Best-Seller, The Shinar Directive: Preparing the Way for the Son of Perdition, and Chancellor and Founder of Biblical Life College and Seminary) for in-depth teachings from God's Word that provide a balanced approach to life that is both Spirit-Filled and Hebraic. It's time to hit the challenges facing believers today head-on with biblical pri ...
Listen to 500+ topics