Copywriting Sales Copy Sales Direct Response Advertising David Garfinkel Marketing Business Podcasting Education
By David Garfinkel. Discovered by Player FM and our community — copyright is owned by the publisher, not Player FM, and audio is streamed directly from their servers. Hit the Subscribe button to track updates in Player FM, or paste the feed URL into other podcast apps.

Copywriters Podcast « »
The Big Idea, Micro-Scripts and a Special Surprise, with Bill Schley


MP3•Episode home
By David Garfinkel. Discovered by Player FM and our community — copyright is owned by the publisher, not Player FM, and audio is streamed directly from their servers. Hit the Subscribe button to track updates in Player FM, or paste the feed URL into other podcast apps. 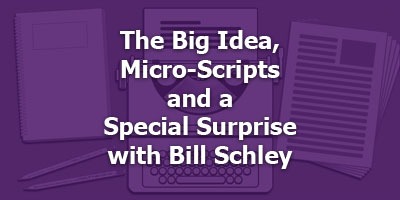 1d ago1d ago
Subscribe
Unsubscribe
Weekly+
Audio interviews with industry leaders and senior faculty with exclusive insights on current topics brought to you by Knowledge@Wharton and the Wharton School of the University of Pennsylvania.
L
Legends of Sales and Marketing

6h ago6h ago
Subscribe
Unsubscribe
Monthly+
From People.ai, this is the Legends of Sales and Marketing podcast. Each week we'll dive into a story from a different legend of sales and marketing to find out how they changed the game. Visit people.ai/legends for more episodes, interviews, and profiles on more legends of sales and marketing.
V
Village Global's Venture Stories

5m ago5m ago
Subscribe
Unsubscribe
Weekly+
Village Global's Venture Stories takes you inside the world of venture capital and technology, featuring enlightening interviews with entrepreneurs, investors and tech industry leaders. The podcast is hosted by Village Global partner and co-founder Erik Torenberg. Check us out on the web at villageglobal.vc/podcast for more.
W
What's Next! with Tiffani Bova

42m ago42m ago
Subscribe
Unsubscribe
Monthly+
Welcome to the What’s Next! Podcast. I’ve met so many brilliant people as I traveled the globe and have had some fascinating conversations that I’ve wished had been recorded so I could share them with you - this podcast was a way for me recreate those moments and let you in on some fantastic insights. My current conversations center around one objective: what's next for companies and individuals as they look to innovate and grow. I hope these conversations inspire you as much as they have in ...
M
Marketing Smarts from MarketingProfs

2h ago2h ago
Subscribe
Unsubscribe
Monthly+
Marketing Smarts is a weekly podcast featuring in-depth interviews with smart marketers from all walks of life. Hosted by MarketingProfs, this 30-minute, weekly podcast will deliver actionable insights and real advice to help you market smarter.
T
The Ziglar Show

1d ago1d ago
Subscribe
Unsubscribe
Weekly+
The Ziglar Show is personal and professional development for those working for something bigger than themselves. Join host Kevin Miller, co host Tom Ziglar, and renowned guests as they discuss business, sales, professional performance, faith, and the Zig Ziglar legacy of, “You can have everything in life you want, if you will just help enough other people get what they want.” | 52 million downloads along with Kevin Miller's "What Drives You" and "True Life" podcasts. KevinMiller.co
T
The Small Business Big Marketing Podcast with Timbo Reid

23d ago3w ago
Subscribe
Unsubscribe
Weekly
The most innovative people in the world of small business go one-on-one each week with marketing expert Tim Reid. In this award winning podcast; business owners share where their original business idea came from, how they got it to market and the strategies they used that led to their business’s unprecedented growth. Host Timbo Reid’s curiosity for what makes business owners tick and his passion for small business success means that every episode is chock full of marketing gold that will hel ...
D
Duct Tape Marketing

1d ago1d ago
Subscribe
Unsubscribe
Weekly+
Welcome to the Disruptors Podcast. This podcast features the most disruptive individuals on the planet no matter what niche or industry they are in, if you want thought provoking conversation with some of the most successful & controversial people alive then the disruptors podcast is a must listen to. Your host Rob Moore is a best selling author, holds 3 world records for public speaking, entrepreneur, property investor, and property educator. Author of the global bestsellers “Life Leverage” ...
S
SUCCESS Podcasts

21h ago21h ago
Subscribe
Unsubscribe
Weekly+
SUCCESS Podcasts are shows for goal-oriented achievers. Hear from our Editorial Board about how they've achieved great heights and what they're doing to continue to climb.
Listen to 500+ topics