Society Joanne Lockwood
By Joanne Lockwood. Discovered by Player FM and our community — copyright is owned by the publisher, not Player FM, and audio is streamed directly from their servers. Hit the Subscribe button to track updates in Player FM, or paste the feed URL into other podcast apps.

Inclusion Bites « »
Freeing women from being prisoners of their pain


MP3•Episode home
By Joanne Lockwood. Discovered by Player FM and our community — copyright is owned by the publisher, not Player FM, and audio is streamed directly from their servers. Hit the Subscribe button to track updates in Player FM, or paste the feed URL into other podcast apps. 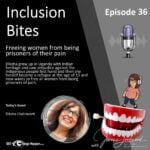 Diksha grew up in Uganda with Indian heritage and saw prejudice against the indigenous people first hand and then she herself became a refugee at the age of 15 and now wants to free all women from being prisoners of pain.

Diksha has been a practising therapist for 23 years and offers integrated wellbeing services for women helping them manage stress, anxiety and pain. She uses pain as a generic term to include physical, emotional, mental, societal and spiritual pain. Through her therapy she enables women to find their own strengths, embracing pain they may have experienced so they can work through it and begin to live their true potential, without societal pressures.

Diksha believes we live in a very patriarchal, often hypocritical society which has kept women suppressed and often those that have broken free of this often do not feel comfortable enough with their position to allow other women in, operating in a protective mode. She says fear disables us. If we are fearful we cannot be generous, so unless we deal with this we cannot be our authentic selves. As a society we seem to look down upon vulnerability and view asking for help as a weakness, but Diksha suggests that it is only by embracing our weaknesses that we become strong. From a young age we are often brought up believing that we need to achieve certain status symbols in order to be seen as successful. This can often lead to us constantly trying to achieve or wanting more, rather than being satisfied with where we are and if we cannot achieve whatever expectations we have set for ourselves or we believe society to expect of us, ultimately leading to a sense of failure.

Diksha grew up in Uganda living, as she views it ‘a charmed life’ but she was aware, especially for the indigenous people that life was very different. At the age of 15 she was forced to leave Uganda due to Idi Amin and went to India, before travelling to the UK, a move she found incredibly stressful, especially managing the cultural differences. Due to these moves she grew up never feeling like she belonged anywhere and feeling on the outside. She was unaware of racism that many others suffered during this period, due to being disconnected, something she traces back to growing up in a violent home. These past traumas have made her resilient and allow her within her role as a therapist to assist others with their own journeys. Her mission in life is to support women that need it, showing them everything that is available if they allow themselves to be vulnerable and ask for help, which is why she is so passionate about needing an integrated system as this allows for rapport and trust building. She believes we are often paralysed by our circumstances and don’t know how to break out of this, everything we want is on the other side of fear’, almost like Stockholm syndrome and we don’t have the tools or courage to break through this ‘fear’ barrier. Diksha ends by saying ‘you can do it, lets do it together.’

Please connect with our hosts and guests, why not make contact..?

Brought to you by your host

A huge thank you to our wonderful guest

The post Freeing women from being prisoners of their pain appeared first on SEE Change Happen: Transgender Awareness & Inclusion.