Tech Podcasting Walid Al Saqqaf - Blockchain insurance Cryptocurrency Business Supply Chain
By Walid Al Saqqaf - Blockchain insurance. Discovered by Player FM and our community — copyright is owned by the publisher, not Player FM, and audio is streamed directly from their servers. Hit the Subscribe button to track updates in Player FM, or paste the feed URL into other podcast apps.


MP3•Episode home
By Walid Al Saqqaf - Blockchain insurance. Discovered by Player FM and our community — copyright is owned by the publisher, not Player FM, and audio is streamed directly from their servers. Hit the Subscribe button to track updates in Player FM, or paste the feed URL into other podcast apps.

Shermin Voshmgir is the author of the book Token Economy, the founder of Token Kitchen and BlockchainHub Berlin. In the past she was the director of the Research Institute for Cryptoeconomics at the Vienna University of Economics which she also co-founded. She was a curator of TheDAO (Decentralized Investment Fund), an advisor to Jolocom (Web3 Identity), Wunder (Tokenized Art) and the Estonian E-residency program. In this podcast we discuss “How to design your own token system”.

Blockchain is a collectively maintained public infrastructure where people are incentivised to keep the ledger up to date in a trustful manner. It is the backbone of this new generation internet often referred to as the Web 3.

Blockchain allows its participants to collectively settle data transactions, whether its value transactions or data flows on a shared public infrastructure that everyone can trust. This contrasts to today’s Web 2 which is managed by private client server infrastructure where data is managed and stored behind the walled gardens of a server that belongs to a specific institution or a private entity.

Shermin believes that blockchain itself isn’t particularly interesting. What is interesting is that blockchain brought the back-end revolution for a decentralised web or Web 3. Tokens are the killer application of the Web 3 as websites were the killer application of the early internet in the 1990s when the World Wide Web came about.

Cryptocurrencies and crypto assets are specific type of tokens.

A token can represent money, whether it’s state issued money, often referred to as CBDC (central bank digital currency) or virtual currencies such as cryptocurrencies.

Tokens can represent any type of assets such as commodities, physical assets and fungible assets like art or real estate. Any virtual or real asset can be tokenized and have a digital representative that is easily traded.

Tokens can also be used to represent an identity of a person, machine or an institution. Credential tokens are tokens that are tied to an identity or that have limited transfer abilities.

A system is use to described how people and objects interact in this physical world. Token systems can have varying degrees of complexity.

Usually, the more actors are involved in a system, the more complex the system and its interactive parts become.

An example of a complex token system is the Bitcoin network which is a network of physical computers operated by humans or institutions. It has a three-layered network composed of tokens, machines, and peer-to-peer network.

An example of a less complex system is a token system that represents tokenizing shares in a company which can be settled on a public or semi-public infrastructure.

Creating a token system, the questions

When creating a token system the main questions that one should ask themselves are:

For example, if you want to tokenize real estate, the question of how to design your token system is very different than if you want to create a token based social network where the token creation needs an intelligent incentive design for how to incentivize people to upload and curate posts. An example of such a token system is Steem. However, such token systems are very complex and have a lot of unanswered questions.

Tokenising real estate whilst it involves a series of complex legal questions sits within an understood legal framework. Whilst they may seem less complex they can very easily become more complex where your individual real estate objects can be tokenised allowing for fractional tokenization of a single object, like an apartment.

There is a series of technical, legal, economic and ethical questions to be asked when we design our token system, but the first question is always, what do I want to do? 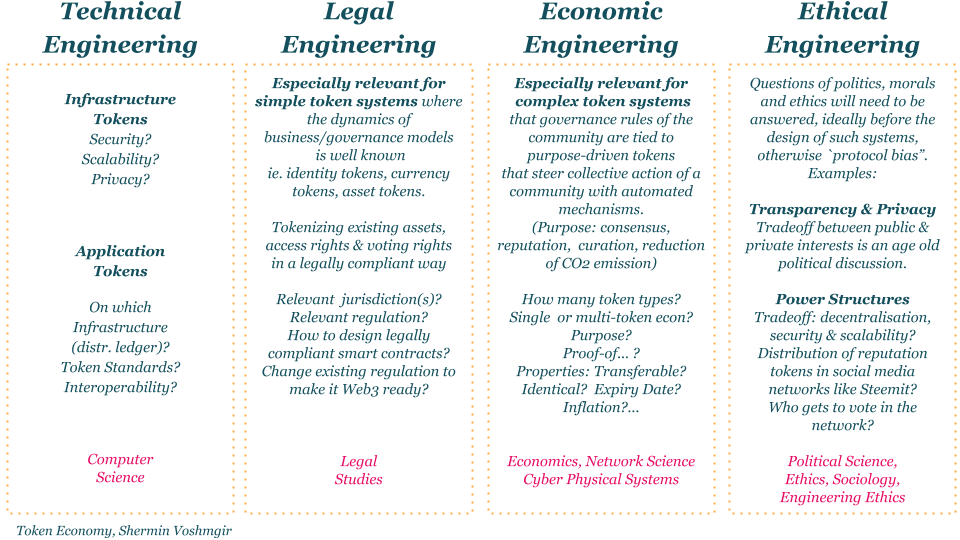 Design thinking became popular in the startup world in the 90s. It helps to strategically plan concepts for any new technology, products or service. The process ranges from problem definition, ideation, solution-focused strategies, modelling, prototyping, testing and evaluating including iterative feedback loops thereof.

In the case of token systems, design thinking approaches, the technology being blockchain allows for interactions to happen on a socio economic level. It also allows for the move away from individual products and services to collectively shared dynamic socio economic systems.

In March 2018, Trent McConaghy, co-founder of Ocean Protocol, coined the terms token engineering and explained his thinking in a blog post entitled “Towards a Practice of Token Engineering”. Which he describes as: “the theory, practice and tools to analyze, design, and verify tokenized ecosystems.“

Trent also defined “Engineering is about rigorous analysis, design, and verification of systems; all assisted by tools that reconcile theory with practice. Engineering is also a discipline of responsibility: being ethically and professionally accountable to the machines that you build”.

For Shermin, engineering always requires the ethical part. Part of the challenges of the early websites is that the engineering ethics of building websites didn’t exist. When websites failed they simply pivoted. Token engineering forces us to think in more robust and responsible ways and it can sit at the intersection of design thinking when creating new token systems.

Token systems either have an infrastructure token or an application token.

When designing an infrastructure token you have to balance the needs for security, scalability and privacy.

When designing an application token you have to balance the needs for infrastructure, interoperability and standards.

We’ve had securities for hundreds of years. As a society we know how to issue securities, manage securities and manage the issue of fraud and security. Essentially, we have built the mechanisms to prevent fraud, to protect investors and to create a safe ecosystem where we avoid the kind of stock market crash we had in the 1930s.

If we were to tokenising the New York Stock Exchange for example we would need to answer the following questions:

Legal engineering, whilst is complex in itself, is only focused on the legal aspect. Tokenisation of existing businesses, networks and institutions predominantly requires legal engineers, which refers to making the tokenization of existing assets, access rights and voting rights legally compliant within relevant local legislation. In this case legal engineering refers to the tokenisation of traditional governance models where smart contracts replace many of the existing human, paper and client server based operations.

Economic engineering is used when designing “complex token systems”. What contributes to the complexity of a token system is:

Tokens are there to they steer collective action towards a common purpose. The main question that need to be answered in such design process are:

The economic engineering aspect of creating decentralised autonomous organisations where you have a number of autonomous actors from different backgrounds you need to have behavioural economics, ecological economics, micro and macro economics. You need network scientists and people of different skill sets.

3h ago3h ago
Subscribe
Unsubscribe
Daily
SUCCESS Podcasts are shows for goal-oriented achievers. Hear from our Editorial Board about how they've achieved great heights and what they're doing to continue to climb.
B
Business Story of the Day : NPR

42m ago42m ago
Subscribe
Unsubscribe
Weekly
Pat Flynn from The Smart Passive Income Blog reveals all of his online business and blogging strategies, income sources and killer marketing tips and tricks so you can be ahead of the curve with your online business or blog. Discover how you can create multiple passive income streams that work for you so that you can have the time and freedom to do what you love, whether it's traveling the world, or just living comfortably at home. Since 2008, he's been supporting his family with his many on ...
K
Knowledge@Wharton

11h ago11h ago
Subscribe
Unsubscribe
Weekly+
Audio interviews with industry leaders and senior faculty with exclusive insights on current topics brought to you by Knowledge@Wharton and the Wharton School of the University of Pennsylvania.
E
Exchanges at Goldman Sachs

20h ago20h ago
Subscribe
Unsubscribe
Weekly+
In each episode of "Exchanges at Goldman Sachs," people from the firm share their insights on developments shaping industries, markets and the global economy.
T
The Small Business Big Marketing Podcast with Timbo Reid

1d ago1d ago
Subscribe
Unsubscribe
Weekly
The most innovative people in the world of small business go one-on-one each week with marketing expert Tim Reid. In this award winning podcast; business owners share where their original business idea came from, how they got it to market and the strategies they used that led to their business’s unprecedented growth. Host Timbo Reid’s curiosity for what makes business owners tick and his passion for small business success means that every episode is chock full of marketing gold that will hel ...
M
Matrix Moments by Matrix Partners India

20d ago2w ago
Subscribe
Unsubscribe
Monthly+
Matrix Moments, by Matrix Partners India, is a podcast series dedicated to the founders, startups and all those within the ecosystem, through candid conversations on what we think it really takes to survive in this wild, wild startup world. In a world where we are endlessly engulfed with information in all its forms and sizes, this is our attempt to create, curate and bring to you the insights and reflections that we have had the luxury of having learned the hard way, through all the years s ...
P
Phones Show Chat

20m ago20m ago
Subscribe
Unsubscribe
Daily
The daily drama of money and work from the BBC.
Listen to 500+ topics