Primary Care Cures « »
Episode # 96 – Praveena Jaidev MD is One of 127,000 Foreign Medical Graduates Who Struggle to Join the American Medical Workforce Despite Severe Shortages. She’s Doing Something About it in Congress. 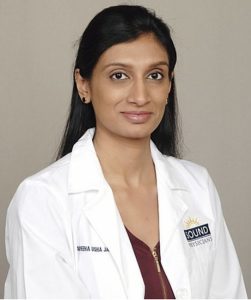 In this episode, Ron chats with Praveena Jaidev, a Hospitalist at SwedishAmerican and Member of Physicians for American Healthcare Access, a group dedicated to increasing healthcare access in underserved communities. They advocate for legislative solutions to protect Immigrant Physicians. Here she discusses the difficulties foreign born doctors face while trying to work in America and how they are often more willing to work in rural or underserved communities. She also talks about the importance of The Healthcare Workforce Resilience Act, which would help foreign born doctors and nurses get their green cards, helping with severe physician and nursing shortages. Praveena shares her own experiences, her career, her hopes for the future, and more.

Praveena Jaidev, MD is a Hospitalist at SwedishAmerican, A Division of UW Health. She is employed with Sound Physicians under the Conrad 30 Waiver Program and is one of ~127,000 Immigrant Physicians who account for nearly a quarter of all the country’s licensed Physicians. She was born and raised in India where she attended medical school. She is Board Certified by the American Board of Internal Medicine.

Praveena completed her Internal Medicine Residency at UPMC Pinnacle on a J-1 visa. Currently, Resident Physicians from other countries working in the U.S. on J-1 visa waivers are required to return to their home country after their residency has ended for two years before they can apply for another visa or green card. The Conrad 30 Program allows these Physicians to remain in the U.S. without having to return home if they agree to practice in an underserved area for three years. Many communities, including rural and low-income urban districts, have problems meeting their patient care needs and depend on the Physicians in this program to provide healthcare services. Rockford, IL, is a Health Professional Shortage Area.

One-sixth of our nation’s healthcare work force is foreign-born. International Medical Graduates (IMGs) play a vital role in caring for some of the most vulnerable populations in the U.S. Many IMGs like Praveena practice in the U.S. on non-immigrant work visas (H-1B). They are more likely to practice in rural and underserved areas, providing needed care to communities that lack it, thanks in large part to policies like Conrad 30 Program.

A June 2020 Association of American Medical Colleges study projects a shortfall of up to 139,000 Physicians by 2033. PAHA is actively backing a bipartisan, bicameral measure, the Healthcare Workforce Resilience Act (S.3599 / H.R. 6788). The legislation would allow United States Citizenship and Immigration Services to “recapture” up to 40,000 green cards previously authorized by Congress that have not currently been used. The bill would respond to severe Physician & Nursing shortages by reserving 15,000 green cards for foreign-born Physicians and 25,000 green cards for foreign-born Nurses.

Physicians referred to in this legislation are American-trained healthcare workers, but our strict visa requirements often do not afford us the flexibility to serve changing needs amid the pandemic. For example, we are not allowed to take shifts at hospitals other than the ones that have specifically sponsored our visas or volunteer in hot spots like NYC (March/April), CA/TX/AZ (July/August), etc.

Foreign nurses, on the other hand, often are approved to come to America on employment-based green cards. But even after their applications are approved, many get stuck in their home countries due to U.S. processing delays and backlogs.

The Act ensures foreign-born Physicians and Nurses have protections and flexibility to respond to COVID-19 and other healthcare issues. It strengthens the workforce and ensures access to quality healthcare. Till date, 40 Senators and 75 House Representatives have sponsored the Healthcare Workforce Resilience Act. 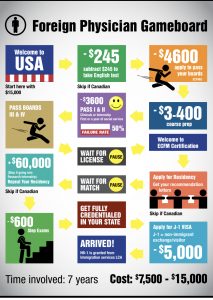 The post Episode # 96 – Praveena Jaidev MD is One of 127,000 Foreign Medical Graduates Who Struggle to Join the American Medical Workforce Despite Severe Shortages. She’s Doing Something About it in Congress. appeared first on Primary Care Cures.

3d ago3d ago
Subscribe
Unsubscribe
Weekly
The Michael Caz Podcast brings you the latest in health, business, relationship, and adventure.
B
Business Story of the Day : NPR

1M ago4w ago
Subscribe
Unsubscribe
Monthly+
PT Inquest is an online journal club. Hosted by Erik Meira and JW Matheson, the show looks at an article every week and discusses how they apply to current physical therapy practice.
T
The Big Picture Philippines

19m ago19m ago
Subscribe
Unsubscribe
Monthly
The Big Picture is a business podcast that is on a mission to shift the mentality that Filipinos are not business-oriented. If you are someone who wants to start a business, already on your way, or has a business already that wants to scale, this podcast is for you. We interview Filipino entrepreneurs from all walks of life, learning their stories, and how they've made it happen. It's time to SEE, THINK, and ACT Big mga pinoys! See you on the show!
B
Banking Information Security Podcast

34m ago34m ago
Subscribe
Unsubscribe
Weekly+
In each episode of "Exchanges at Goldman Sachs," people from the firm share their insights on developments shaping industries, markets and the global economy.
T
The Bottom Line

27m ago27m ago
Subscribe
Unsubscribe
Weekly+
Audio interviews with industry leaders and senior faculty with exclusive insights on current topics brought to you by Knowledge@Wharton and the Wharton School of the University of Pennsylvania.
M
Matrix Moments by Matrix Partners India

34m ago34m ago
Subscribe
Unsubscribe
Monthly+
Matrix Moments, by Matrix Partners India, is a podcast series dedicated to the founders, startups and all those within the ecosystem, through candid conversations on what we think it really takes to survive in this wild, wild startup world. In a world where we are endlessly engulfed with information in all its forms and sizes, this is our attempt to create, curate and bring to you the insights and reflections that we have had the luxury of having learned the hard way, through all the years s ...
S
Spartan Up! - A Spartan Race for the Mind!

1h ago1h ago
Subscribe
Unsubscribe
Weekly+
Learn the Spartan mindset. Founder & CEO of Spartan Race and NY Times best-selling author, travels the globe seeking and answers authors, academics, athletes, adventurers, entrepreneurs, CEOs and thought leaders. It will shift your thinking, make you laugh and and give you the tools you need. He’s on a mission to find the secrets to success in all aspects of life. Not only does Joe interview epic people, he has brought together an amazing panel to break down and analyze every aspect of these ...
Listen to 500+ topics