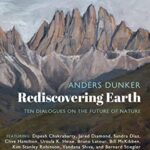 Thinking about how to think about climate, earth, humans on it, and the future, are major challenges for all of us who care about the future of our planet. It may be that most of us alternate between despair and rage, and even with an optimist’s outlook, we have trouble dealing with the sheer scope of what is happening to our surroundings (I think using the words “environment” and “earth” and “planet” has now become counterproductive).

I am constantly searching for writing, whether it is in books, online or in magazines, that will offer me constructive perspectives, different and hopefully better conceptual frameworks than those we have developed, toward making it possible to be both continually engaged and continually energized. I don’t usually feel I can do that on my own.

Anders Dunker’s collection of conversations with some of the deeper thinkers about the future and us in it, turns out to be very useful. The diverse viewpoints, the language of thoughtfulness and care, the commitment to inquiry, are all inspiring elements of this short book. And with such a diverse set of outlooks, it is possible to not lose sight of the core reason for this book to exist – to inspire hope.

Dunkers poses this question: “if we know that we are destroying the planet, our habitat, why do we continue to do it?” His dialogues attempt to investigate this question, and thereby come to some sense of how we might go forward, not ourselves alone, but the nature that we rely on, together.

This is the challenge we face right now. The challenge will be different in a few years, the unfolding story will force a reckoning. For now, those who read the stories in Rediscovering Earth will be able to come to a better sense of what we can and must do together in this moment.

Dunkers proposes that our future, nature itself, will be based on how we navigate the realm of culture, including philosophy, art and literature, the groundwork of our being, as much as or more than in scientific and technological matters. In order to act, we must redefine ourselves, become truly planetary citizens, and recognize how we are all connected, and then act upon, from that, understanding.

We had a terrific conversation, not only about the book and the contributors to it, but about how we will uncover the future and live in it together. A very hopeful experience. I came away from our talk fully energized, and feeling stronger.

Anders Dunker bio (from his website): Born in Norway, raised in the countryside in a family much dedicated to wildlife and nature. Educated in humanistic subjects and Cultural History at the University of Oslo, with Philosophy, Comparative Religion and Comparative Literature as main subjects. Teacher of Aesthetics and other subjects at the University of Oslo, Philosophy and Cultural History in Rome and Barcelona.

His current book projects include an essay on the future as seen from California and a volume on Peter Sloterdijk’s philosophy. Anders currently lives with his wife, an environmentalist and animalist singer, in Los Angeles, California. He is also a plein air painter. 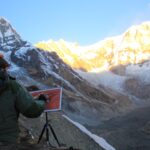 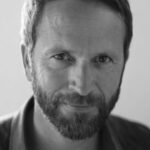 From Dialogue One: “The Rediscovery of the Earth—with Bruno Latour”

Anders Dunker (AD): Historically, the age of discovery is over. Are we none the less in a new age—an age of rediscovery—that can lift our spirits and propel us past the nagging feelings of tragedy?

Bruno Latour (BL): Well, it is my way of being optimistic. It is my way of not taking part in the sense of doom. Scientifically and technically, it is perfectly rational to be a pessimist, but I don’t think it makes much sense politically. Optimism has nothing to do with technoscience—DNA plus cognitive science plus robots plus outer space. Instead it is connected with exploring the world we thought we knew. I will borrow the term from you and call our time period an age of rediscovery, even if it is grandiose. What we call local has quite a different meaning in relation to Gaia than it previously had. It now has many different dimensions. The rediscovery of a place is in some ways a cliché—since ecologists have been talking about the same thing for years—but this concept also leads to a different way of framing the world, it leads to another geometry, so to speak. Water gets another meaning. Ice gets another meaning. Industry is considered in relation to the amount of CO₂ in the atmosphere. We see things in new ways. Antibiotics have a different kind of globalization than weeds, for example.

AD: Traditionally, the concept of the local has had a flavor of subjectivity—existence circumscribed by the immediate horizon—in contrast to the scientific gaze, which purports to see everything as if from outer space?

BL: And here lies the error. The local is objective. The gaze from inside the critical zone is completely objective, it is just objective in a different way. What we see is real, but this reality only becomes visible if we learn what different parties are up to, what they need, what they want, what they can accomplish.

Buy the book directly from the publisher, OR Books.