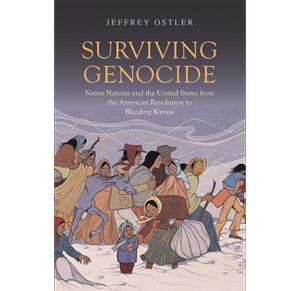 “A landmark book essential to understanding American history, Surviving Genocide is an act of courage. Ostler’s brilliant concept of reconstructing ‘an Indigenous consciousness of genocide’ is significant for its insight into how American Indians understood, discussed, and resisted genocidal threats to their families, communities, and nations. His modern vocabulary of ‘atrocities’ and ‘killing fields’ is not for political effect but appropriate to the brutal reality of Indian policy in American history.”—Brenda Child, Northrop Professor of American Studies, University of Minnesota

Even though many of us feel we are familiar with the story of the “settling” of America by Europeans and the dispossession of indigenous people, reading Jeffrey Ostler’s book, part one of a major two-volume history, will educate every single one of us to a better understanding of the full scope of the takeover of a continent by invading Europeans. Conquest and genocide are terms we seem unable to apply to our own history, preferring still a more sanitized version of the centuries long overwhelming of the people who lived here before Europeans arrived in force.

Ostler has spent years of research documenting the governmentally sanctioned use of force to remove or kill the indigenous people who were inconveniently in the way of the relentless expansion of the American republic. In this book he documents the losses from the violence – massacres, destruction of habitat and lifeways, diseases and cultural upheaval suffered sequentially by native peoples for hundreds of years as first colonial settlers and then Americans flooded the continent. This volume covers the story of the eastern United States from the 1750s to the beginning of the Civil War that set the stage for the post-Civil War expansion that is perhaps the better known narrative – buffalo, horses, trains, Crazy Horse and the Lakota being so much a part of popular culture imagery. As Ostler shows, the way this played out was not “inevitable” and Manifest Destiny was neither. The indigenous people were outnumbered, but often not out maneuvered or outwitted, and their ability to survive the nightmares of dispossession and attempted genocide is heroic.

As Americans, it is sometimes difficult to look at our own history with honesty. It is often said that the “original sin” of America is slavery, but I think we must grapple with the actuality that there are two essentially economic-based social and cultural wounds at the heart of the American project. First, there is the forced dispossession of the people who were on the land itself, and second, the forced migration and enslavement of Africans for the benefit of white Americans and their economic development. We must learn as much as we can about the history of the last five hundred years in North America in an unromanticized, clear-eyed effort to fully comprehend what our forebears did in the course of creating the American dream all of us are allowed thereby to enjoy. The truth in all its complexity should serve as counterweight to the false narratives and self-serving images we choose to live by, all created as a form of ongoing social control.

Indigenous people have survived despite the many attempts to extirpate them or to forcibly transform and bend their cultures into the conquerors’ image of what “civilization” looks like. Still, the traumatic effects of conquest need to be recognized, acknowledged and repaired and it would be no small thing to recognize formally that a genocide was in play, with all the social and political results that term carries with it. This book and presumably the subsequent volume in Ostler’s work, should help us move in that direction.

The book is well written, hard to put down and completely engrossing; its authoritative and well-researched approach makes it a powerful document and well worth your time to read.

I’m grateful for Jeffrey Ostler for taking the time to talk to me about this book and for Yale University Press for alerting me to it.

Jeffrey Ostler is Beekman Professor of Northwest and Pacific History at the University of Oregon and the author of The Lakotas and the Black Hills and The Plains Sioux and U.S. Colonialism from Lewis and Clark to Wounded Knee.

Buy the book at Bookshop.org 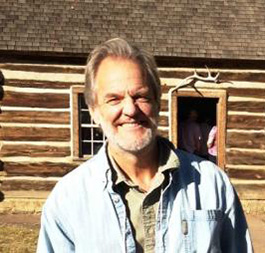 The post Surviving Genocide: Native Nations and the United States from the American Revolution to Bleeding Kansas: Jeffrey Ostler first appeared on WritersCast.